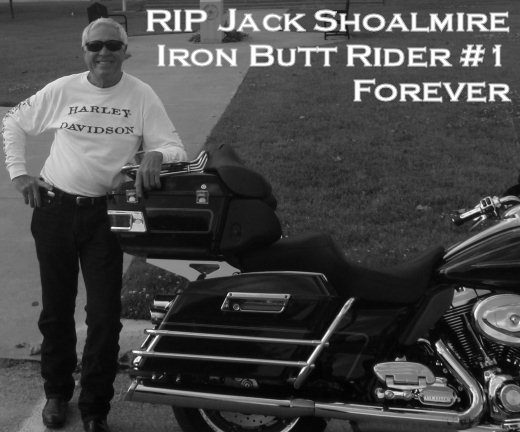 Of the tens of millions of motorcyclists here and abroad, only 50,000 or so have been certified as riding over 1,000 miles in under 24 hours by the Iron Butt Association (IBA). Of these, only 11 have completed over 20 certified distance and endurance rides and qualified as members of the IBA Mile Eater GOLD Club. And of these, only (mostly) BMW rider and LDR legend Jack Shoalmire is credited with 50 or more certifications. My current riding resume pales in comparison to Jack’s, but nevertheless at 10:46pm on Saturday (19 June 2010) I logged a Publix/Presto ATM slip to mark the successful completion of what should be certified as my 5th SaddleSore 2000 and my 50th Iron Butt Ride. And once it is, according to IBA founder and President Mike Kneebone, that will be the first time a Harley-Davidson rider has hit the 50-ride benchmark, and the first time any Iron Butt rider has completed 50 certified rides on the same motorcycle.

Sleepy witness signatures gathered, at 6:19am on Friday, 18 June 2010, I pulled an ATM slip at a SoBe Wachovia and logged the start of my ride. It was a typical muggy South Florida summer morning. But once I got rolling, the wind evaporated the beads of sweat and I had cool running all the way west across an almost empty Alligator Alley. Workday morning traffic slowed me down as I headed north up IH-75 through Naples and Fort Myers, but once the traffic thinned I had perfect riding conditions all the way to Tampa. Just north of there, I hit the first of three major accident-related traffic jams and rubbernecker slowdowns (that seem to occur every time I ride that stretch of interstate). These queues mandated some creative lane definition in order to maintain an acceptable pace of forward progress. But from my gas stop in Alachua northward into Georgia, all the cagers kept their eyes on the road and their shiney sides up, which allowed me to sail on into my turnaround point at Cecil with no further interruptions or irritations beyond the seemingly perpetual road construction along that route.

Heading south back to Florida, it was midafternoon by the time I reached Ocala. In Central Florida in the summer, it rains almost every afternoon, and this day was no exception. Those large, cold thundercloud raindrops were a welcome relief from the sweltering heat. But after a couple of hundred miles, I’d had all the relief I needed. The downpour finally began to dissipate as I rounded the bend towards Alligator Alley just after 7:00pm. From that point on, the red-orange sun hanging low in the west behind me seemed to be battling yet another band of clouds in front of me for dominance of the turbulent skies over the Everglades. And from this age-old natural conflict came a Kodak moment that made me regret not having a camera:

I was approaching the Broward end of the Alley and home when a glistening in Hidalgo’s left rearview mirror caught my eye. I glanced over to see the reflection of a round red sun sitting in the middle of a bright blue strip of daylight bounded by the horizon beneath it and a cloud bank above. It made the mirror look like a chrome-framed picture postcard. More spectacular, though, was what I saw when I looked back up: A huge, thick rainbow was perfectly centered over the highway before me, framing within it an arch of dark clouds fronted by intermittent bolts of lightning that seemed to flash directly down from the rainbow. It was as if God was staging a rock concert, and it was almost time for the band…

After taking in my fill of skim milk, scrambled eggs and Don Francisco’s Colombia Supremo, I rolled down to the 5th Street Shell and filled up my tank, logging the receipt and the start of leg 2 at 7:27am. From there I made the short hop across the causeway and headed north on IH-95. Being a Saturday, traffic was light and I had smooth sailing all the way through South Florida’s tri-county metroplex and northward to my first stop at Vero Beach. In fact, I had good weather, open roads and easy riding all the way through Jacksonville, Georgia and on into South Carolina.

I reached my turnaround point at Ridgeland SC at 3:08pm … as did the first of several summer showers and thunderstorms I’d be riding through as I headed back southward. Just north of Brunswick GA, the rain started coming down in slanted sheets that slowed me to 15mph for a few minutes. But once I punched through, that was the worst of it.

Sunset was approaching as I stopped for gas in Titusville FL at 7:30pm. Clouds would fill the skies for the rest of the evening, but I was south of the rain now and had dry roads from there to Miami. “Dry” roads, yes, but not necessarily “safe” roads… Somewhere near Mile Marker 100 by Stuart at around 9:00pm, I hit something lying in the road that looked, felt and sounded like either a heavy metal garbage can lid or an overturned manhole cover. It was dark in color, and lying on black asphalt under a starless night sky, so I didn’t see it until I was right on top of it. The impact ripped the spring off my sidestand and took out my speedometer and odometer. Luckily though, I was still upright and rolling, and I didn’t detect any other damage. So at my next and final gas stop in Jupiter, I bungied the sidestand then rode her safely home to SoBe.