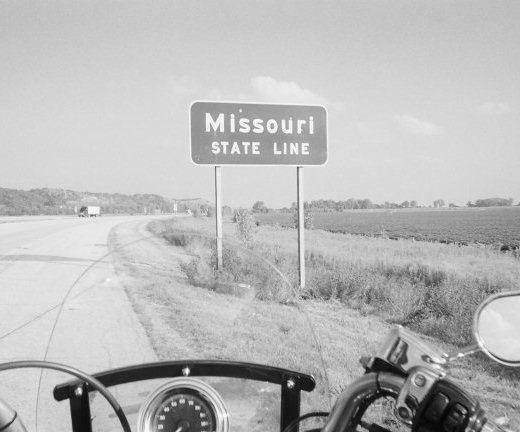 Friday (August 5). My ride began with an Iron Butt SaddleSore 2000 run from Miami Beach, Florida to Rapid City, South Dakota of 2,179 miles in 36 hours 35 minutes road time, 43 hours 55 minutes total time. I left home at 5:55am/E, headed up I-95 to the Turnpike, then north on I-75 through Georgia, connecting with I-24 West in Chattanooga. There was still plenty of daylight as I crossed the southern Appalachian Mountains, over the Tennessee River, and cruised on through emerald foothills to a 7:15pm/C dinner stop in Murfreesboro. Hydrated and refueled, I changed to my night glasses and rode on through Nashville and Paducah Kentucky, crossed the Ohio River into Illinois, then took I-57 North to Mt. Vernon, where at 12:14am/C, I checked into the Comfort Inn with 1,144 miles of my journey complete.

Saturday (August 6). At 7:34am/C the next morning-after several cups of coffee, a light breakfast and a few stretches-I headed west on I-64 through sunshine, showers and the endless corn fields of southern Illinois to St. Louis. There, I crossed the Mississippi River and connected to I-70 West right by the famed Gateway Arch, then crossed the Missouri River (for the first of several times) heading west through the Ozarks towards Kansas City. The scattered trees and grassy slopes of the Missouri countryside reminded me a lot of the Texas Hill Country, and I can certainly see why everybody from Harry Truman to Mark Twain to Jesse James chose to call it home. After passing through Independence, I bypassed Kansas City by taking I-435 North across the Missouri River (again), connecting to I-29, and heading north along the Nebraska border through St. Joseph into Iowa. Continuing on I-29 North, I skirted Omaha via Council Bluffs, then rode on through Sioux City, crossing the Missouri River (once more) into the southeastern tail of South Dakota.

The stretch of I-29 between Kansas City and Sioux City takes you through rich fields and farmlands bordered by rocky and wooded bluffs that seem to go on forever. It is the tribal home of Native Americans like the Winnebago (yes, they were Indians before they became RVs), and was once traversed by Lewis & Clark. It is a territory rich in history and heritage … but lacking in gas hoses. Riders beware: This length of I-29 has more than one exit marked for gas where the gas stations are closed down or don’t even exist. It may be a temporary problem, but my advice would be to top off your tank in St. Joseph and Council Bluffs, heading north or south.

Continuing north on I-29 to connect with I-90 West in Sioux Falls, South Dakota, the landscape rapidly changed as I rode through vast, open expanses of the Drift Plains that might easily have inspired that line about “… amber waves of grain.” At 7:19pm/C, I stopped in Alexandria for gas and a change to night glasses, but thanks to an extended twilight I was still able to view another abrupt change in terrain as I crossed the Missouri River (for the fourth time) into the rolling prairies, canyons, and flat-topped buttes of central South Dakota. Somewhere in the cool darkness west of there, I rode into the Mountain Time Zone and on across the Badlands to the Black Hills. I made Rapid City and checked into the Days Inn at 11:50pm/M. That marked the end of my 2,179 mile ride, just in time for the beginning of the Black Hills Rally.

Next Month … The Rally!