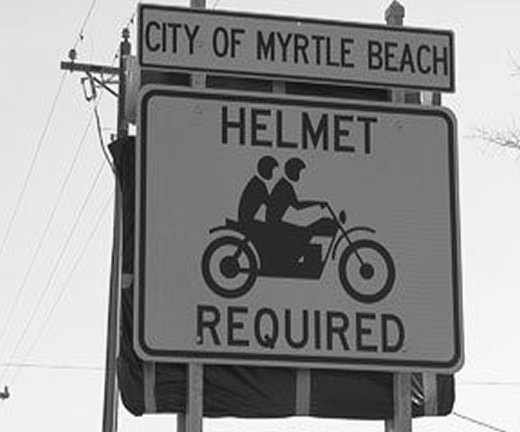 When you mention bikers’ rights, the first thing that comes to many people’s minds is the helmet issue, which I believe to be one of the most widely debated yet least understood items on the MRO agenda.

First of all, the real issue is NOT helmets … it is whether motorcycle riders should be required by law to wear them. This is a helmet law issue, and a question of individual liberties and freedom of choice. It is NOT a safety issue, but safety is the arena where the fight is taking place.

I believe we are fighting the wrong battle. We are fighting a battle that cannot be won, and doesn’t need to be. We are engaging the enemy on their grounds, and under their terms. And if you follow the teachings of Sun Tzu, you know that to be a strategic blunder.

Let’s say I tied you to a chair, stood in front of you with a hammer and a helmet, and asked if you wanted me to strap the helmet on you before I hit you on top of your head. Would your answer be “Yes?”

Of course you’d say “Yes!” Anybody with enough sense to get a driver’s license knows that wearing a helmet increases the safety of the head it covers. Despite that knowledge, we have one of the nation’s largest SMROs issuing a press release that claims:

According to the recently released, Florida Department of Highway Safety and Motor Vehicles annual Traffic Crash Statistics Report for 2004, motorcycle riders wearing helmets were more likely to sustain an injury or suffer a fatality than their non-helmeted counterparts…. Of the 388 motorcycle riders killed in crashes on Florida roads during 2004, over 51% were wearing safety helmets. The crash facts also demonstrate that riders wearing safety helmets were more likely to sustain injuries than non-helmeted riders. In each of the statistical focus topics presented in the study, the percentage numbers were very close between helmeted and non-helmeted riders, except for non-injury crashes. The study stated that non-helmeted riders were 20% more likely to walk away from a crash without injuries than riders who were wearing helmets. This disparity could be due to the visual and physical limitations imposed by a helmet. Wearing a motorcycle helmet cannot keep a crash from occurring, however, riding without a helmet could allow a rider to respond more quickly or to visually recognize potential hazards, decreasing the severity of the injury sustained or avoiding injury all together.

What’s wrong with these statements? Among other things, the report referred to …

does NOT state that “‘Helmetless’ Riders are Less Likely to Die in Motorcycle Crashes on Florida Roads,”

does NOT state that “… motorcycle riders wearing helmets were more likely to sustain an injury or suffer a fatality than their non-helmeted counterparts,”

does NOT state that “…non-helmeted riders were 20% more likely to walk away from a crash without injuries than riders who were wearing helmets,”

… and, NONE of these assertions can be supported by application of scientifically valid statistical methods to the data reported.

Yes, it is true that according to the 2004 Florida Traffic Crash Statistics Report, 388 motorcyclists died in fatal crashes, 200 (51.55%) wearing helmets and 188 (48.45%) not. And yes, according to the report, 762 motorcycle riders and passengers were involved in crashes but not injured, 304 (40%) wearing helmets and 458 (60%) not. But this is only one year’s data, from which no statistically valid conclusions can be drawn to support the probabilities or likelihoods asserted in the SMRO press release.

What’s missing is not only trend or time series data, but also a provable correlation or cause-and-effect relationship. Let’s says that 100 riders headed for Sturgis and 30 broke down along the way, 20 of the 30 riding Harleys and the other 10 riding BMWs. Given only those facts, could you reasonably conclude that the chances of any rider making it to Sturgis are 7 in 10? Or, could you indisputably claim that Harleys are twice as likely to break down as BMWs?

Over the 2004 period of the study, how many motorcycle riders were on the roads and exposed to crashes? How many of the riders wore helmets, and for what percentage of their total riding time did they wear them? With data like this, we might learn that 200,000 riders wore helmets 100% of the time, 100,000 wore helmets 50% of the time, and 300,000 riders never wore helmets. We might analyze this as being the statistical equivalent of a base of 600,000 riders, 250,000 wearing helmets and 350,000 not. If that were the case, then there might appear to be a statistically significant positive correlation between fatal crashes and helmet-wearing. But we don’t have that base data, so we can’t establish that correlation.

Let’s say we did have the data, and we were able to establish the correlation. Let’s say the numbers actually did support an assertion that “… motorcycle riders wearing helmets are more likely to be involved in a fatal crash.” Most people wouldn’t believe it, even given the “visual and physical limitations” argument put forth by the SMRO.

If the numbers supported it, I could believe that “… motorcycle riders wearing helmets are more likely to be involved in a fatal crash.” But that is NOT the same as saying that wearing a helmet increases the likelihood of a fatal crash. Instead, I believe that inexperienced riders are both more likely to wear helmets and more likely to crash than experienced riders. In other words, I suspect that experience might be the true base of the correlation, and helmets merely an indicator. Maybe someday, somebody will research that!

So, what drove the SMRO to issue such a press release? This did: In August, the National Highway Traffic Safety Administration (NHTSA) released a report entitled “Evaluation of the Repeal of the All-Rider Motorcycle Helmet Law in Florida,” the abstract of which reads as follows:

Effective July 1, 2000, Florida eliminated the legal requirement that all motorcycle riders wear helmets. State law now requires helmet use only by riders under the age of 21, or older riders who do not carry at least $10,000 of medical insurance. Observational surveys and crash reports indicated that helmet use dropped substantially following the law change. Motorcyclist fatalities increased by 81 percent comparing 2001-2003 to 1997-1999, compared to +48 percent nationally. Non-fatal serious injuries began increasing in the first six months of 2000, increased by 32 percent in the first year following law repeal. There was a 40 percent increase in the number of injured motorcyclists who were admitted to hospitals. Admissions for head injuries increased by 82 percent. The average head injury treatment cost increased by almost $10,000, to $45,602. In 1998 and 1999, the acute care hospital charges for head-brain-skull principal injury cases per 10,000 registered motorcycles were $311,549 and $428,347 respectively. The comparable figures for 2001 and 2002 were $605,854 and $610,386, adjusted for inflation. Time series analysis showed a statistically significant increase in fatalities while controlling for changes in motorcycle registrations. Similar analyses also showed significant increases for Kentucky, Louisiana and Texas. Florida crash reports also indicated that helmet use declined markedly among riders under age 21, who were still covered by the law. Fatalities in this age group nearly tripled in the three years after the law change. Comparing the 30 months before and after the law change, there was an increase of 55 percent in the average annual number of motorcyclists killed (181 to 280, respectively). Registrations increased an average 33.7 percent in this time period. Some of the increases in fatalities and other injuries in Florida were probably due to this increased ridership. The expected number of motorcycle fatalities as a result of the increase in registrations was 242. The actual number who died in 2002 was 301, 56 (+24 percent) more motorcycle fatalities than expected as a result of increased registrations alone. Nationally in 2001 and 2002, motorcycle miles of travel declined compared to earlier years. Given the large registration increase in Florida, it is unlikely that this national pattern held in the State.

In short, the NHTSA report blames the July 2000 change in Florida’s motorcycle helmet laws for a significant portion of the increases in motorcycle crash injuries and deaths that have occurred since that date. The SMRO apparently saw this as a challenge in the safety arena, and responded with the first statistics that seemed suitable for their purpose. What they missed is that NHTSA’s analysis, like their own analysis of the 2004 Florida Traffic Crash Statistics Report, failed to address the possibility that the increases in crash deaths and injuries not attributable to increased registrations may be attributable to a disproportionate increase in the number of inexperienced riders as opposed to any decrease in helmet usage. And as I said earlier, maybe someday somebody will research that!

So … is that my point then? That the political factions both for and against mandatory helmet laws are making safety arguments flawed by incomplete data, incorrect premises, ignored causal factors and unsubstantiated conclusions?

Nope. That is merely an observation. I conclude as I began: