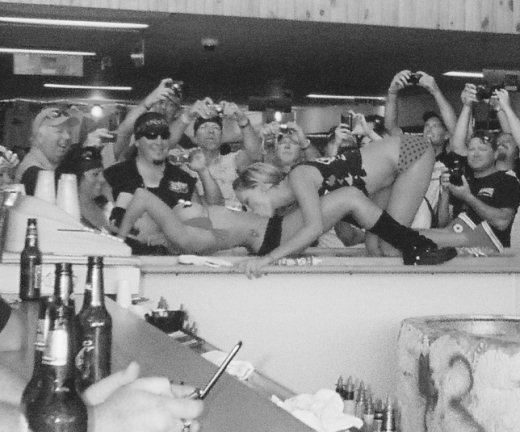 “I never give’em Hell. I just tell the Truth and they think it’s Hell.“–Harry S. Truman 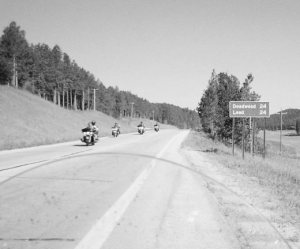 SATURDAY (14 August 2010) marked the end of 15 days and 5,790 miles in the saddle for DP, Hidalgo and me. We rode the first 1,515 miles from Miami Beach FL to Wichita Falls TX in 35 hours 35 minutes, qualifying for what should be certified as my 51st Iron Butt ride – a Bun Burner 1500. The next 1,540 miles took us west across stretches of Route 66 in Texas and New Mexico, then north through the awe-inspiring peaks and valleys of the Colorado Rockies, and finally northeast across Wyoming to Sundance (where the Kid got his name), our home base for the 70th Annual Sturgis Motorcycle Rally. After spending four enjoyable days cruising 455 leisurely miles through the Black Hills of South Dakota and Wyoming, we rode back to SoBe by a shorter 2,280 mile route that took us through the less-inspiring but somehow more inviting ridges and gaps of the Smokies. 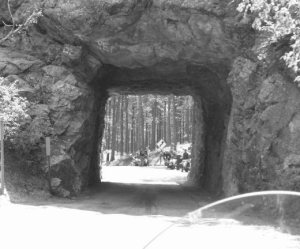 For the first time since 2005, I made it all the way to Sturgis and back without being arrested under a false pretense, getting ticketed for defying an unjust mandate, or having to rush a heat-stricken rider 30 miles to an emergency room. In fact, our greatest misfortune this year was a lack of cell phone service: ATT may cover “97% of Americans”, but they sure as Hell don’t cover 97% of America. 97% of the time my ATT phone was a worthless pocket weight, so I am 97% sure I’ll be replacing ATT with Verizon. Anyway… I’ll share more details about “the Ride” in future installments, but first a disdain for political correctness coupled with deplorable anger management compells me to convey the following commentary regarding “the Rally”:

The commercial exploitation and pussification of the American Biker was as open and obvious at this year’s “Black Hills Trailer Classic” as is the ongoing perversion of patriotism, needless sacrifice of our sons and daughters, and greedy sacking of our treasury, pensions and savings by the Republocratic puppets on the payroll of “Washington, Inc.” and their Kleptocratic masters pulling all strings left and right from Manhattan. “No Colors or Weapons Allowed Inside” signs pervaded business establishments along Main and Lazelle in Sturgis proper, making clear their intent to strip us of our culture as they take away our cash. I ignored them as I always do, but this year the Case 286 sheathed on my belt actually got me summarily uninvited from two “biker-friendly” bars that will receive no free press here.

Meanwhile, just down the road at the Buffalo Chip–owned and operated by Belle Fourche attorney Rod Woodruff–throngs of both motorcyclists (those who rode) and trailerists (those who towed) wearing shiny new Hot Leathers vests adorned with just-purchased pins and freshly-sewn patches that say something but mean nothing (ok, been there) mindlessly welcomed registered sex offender and alleged child pornographer Paul Reubens a.k.a. “Pee Wee Herman” [ see http://today.msnbc.msn.com/id/4563512 and http://tinyurl.com/peeweeonpervlist ] to the stage. As biker-bucks barrister Woodruff put it, “Bob Dylan is here because people like him, and Pee Wee is here for the same reason: They are both American icons.”

Declaring a public peter pumper like Pee Wee Herman to be an “American icon” comparable to one of the greatest folk/protest singer/songwriters of our time is an absurdity, an outrage and an insult to our biker culture. But I can understand why Woodruff would take that position. The Buffalo Chip is, after all, aptly named. As is often the case with fabrications found in the bikers’ rights arena, the Chip exists ostensibly to serve and benefit bikers but effectively to line the pockets of a lawyer. So naturally we can expect that shyster–like any shyster–to say whatever he deems necessary to keep the cash coming his way. What I cannot fathom, however, is why thousands of “bikers” were tripping over themselves to buy Pee Wee Herman t-shirts and dolls, and hundreds even signed up to ride with the sick bastard. Even worse, for a children’s charity like Kids and Chrome to stage a meet-and-greet with an accused kiddie porn collector as a fundraiser simply defies comprehension: 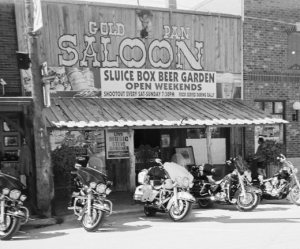 Given Rod Woodruff’s inexcusably perverse but undoubtedly profitable promotion of Pee Wee Herman this year, some are expecting the Chip’s 2011 headliners to include Drop Dead Fred or Boy George, but my money’s on Beverly Hills toilet troubadour George Michael. No matter, though. Barring their resurrection of Jimi Hendrix or Stevie Ray Vaughan, I’ll continue spending my hard-earned biker bucks at the Gold Pan in Custer, the Ponderosa in Hulett, the Dime Horseshoe in Sundance, the National 9 Lariat in Gillette, and the many beckoning Black Hills hideaways where our biker culture is honored and not exploited, our Constitutional right to bear arms is respected and not restricted, and “Welcome Bikers” is a sincere greeting rather than a rubber worm.