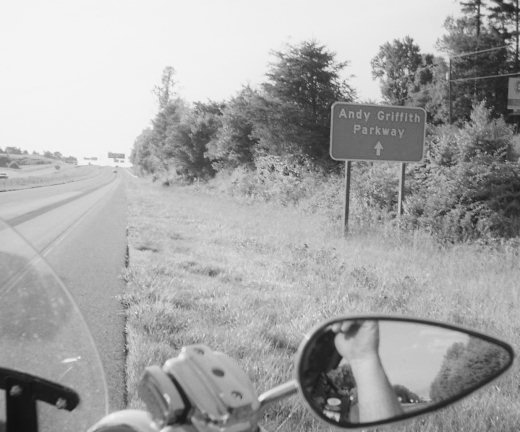 Last spring, some relatives invited me to visit their small ranch near Sierra Vista AZ. Memorial Day weekend seemed like a good time to take them up on the offer, so I logged onto Maps.yahoo.com to route my trip. The shortest route from Miami Beach to Sierra Vista computed as 2,232 miles. But as is often case, the shortest route was not what I was looking for. At that time, earning a SaddleSore 3000 patch and cruising some of “The Mother Road” (a.k.a. Route 66) were high on my wish list, so I charted a 3,069-mile course that would allow me to do both: From Miami Beach, my route was north on I-95 to Benson NC, then west on I-40 to Winston-Salem NC, then northwest on US52/I-74 to I-77 into Virginia, then southwest on I-81 to Knoxville TN, then west on I-40 (and parts of Historic Route 66) to Santa Rosa NM, north on Pre-1937 Route 66 to Romeroville NM, then south on I-25 to Las Cruces NM, and west on I-10 to Willcox AZ. This month, let me tell you about the first leg of this ride:

I logged the start of this SS3000 at 6:09am ET Wednesday, 23 May 2007, but my day had begun two hours before that. The alarm was set for 4:00am, but as is often the case on a “ride day,” anxious anticipation had me awake before it sounded. Coffee and emails first, a shower, and then breakfast with a last look at The Weather Channel. Unsurprisingly, the forecast was for scattered showers all along my route, so I pulled my waterproof Gore-Tex. rain pants out of my bag and over my waterproof H-D FXRG-2. boots before I headed out the door. Note, however, that I did not do this because I actually expected rain “all along my route”. I did it because I have learned that (a) when weathermen forecast “scattered showers” over a wide area, what that means is that it might rain somewhere, but they have no clue where; and (b) wearing rain gear minimizes the chances of you getting soaked by precipitation, by maximizing the probability of you getting soaked by perspiration.

Sure enough, for the first two hundred miles or so, nothing poured from the sky but sunshine. A wickedly constant crosswind, however, finally got the best of my riding vest by literally unlacing the left side–much like what happened near Road Forks NM on my 100CCC run in 2006. I held onto the leather, though, and pulled off to make repairs at the Mims FL exit. Unfortunately, the c-store there had nothing I could use as a replacement lace. So I made do by looping three metal key rings through the top, middle and bottom eyelets of the vest halves.

A few hundred sunny, uneventful miles more took me the rest of the way north through Florida, Georgia and into South Carolina. There, just north of the I-95 exits to Hilton Head, I was twisting the throttle pretty hard when I came up behind what looked at first to be a police cruiser. As I drew closer, though, I could see that the Crown Victoria was solid black. Closer still, and I saw a US GOVT plate between its dual chrome exhausts. “This isn’t a cop car, is it?” I thought. I mean after all, his plates were federal, and he wasn’t exactly observing the speed limit himself. So I decided to see if I could just ease on by him: 82 … no problem … 85 … no problem … 90 … BIG PROBLEM:

My rearview mirrors were suddenly filled with a red and blue laser light show emanating from the darkly tinted windshield of the federal Ford. I pulled over, mentally kicking myself in the ass for my brashness. And by the time I had the sidestand down, the driver of the mystery machine was at my side and in my face. He looked like a pint-sized Barack Obama on his way home from a round of golf, but his voice clearly conveyed the authority of a no-bullshit lawman. DEA? FBI? US Marshall? He showed me no badge, so I still don’t know. What he made sure I did know, however, was that I “…damned well better not pass” his car again. No ticket, but I took his threat to heart, and kept his taillights well in front of me until he finally exited the interstate about half an hour later. 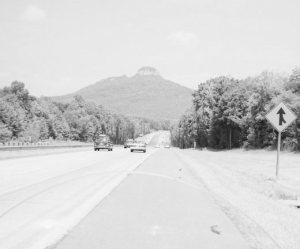 Keeping my rain pants on kept the sun shining brightly as I made my turn west onto I-40 in Benson NC. And even though it was well into the evening hours when I turned north on US-52 in Winston-Salem NC, there was still enough sunlight to see the knobby silhouette of Pilot Mountain just a few miles northwest of there. If that name sounds vaguely familiar to you, perhaps it’s because the nearby town of Pilot Mountain NC is the likely inspiration for the fictional town of “Mount Pilot” on The Andy Griffith Show and Mayberry RFD. I stopped for gas there at dusk (about 8:30pm ET), just before veering off the Andy Griffith Parkway onto I-74/I-77 and crossing the state line into southwestern Virginia.

I didn’t need to see the Blue Ridge Parkway sign to know I was definitely high in the mountains now. Because somewhere near Fancy Gap VA, as I was crossing the spine of the Appalachian Mountains (I didn’t take this photo, but I wish I had!), I glanced off to the east and in the waning twilight saw one endless smoky ridge after another, all rolling gently to the horizon. I should have taken a photo, because other than “breathtaking beauty” I cannot find words to adequately describe my mental image of that moment. A few minutes after that, stars filled a cool, black night sky as I-77 merged into I-81 and turned southwest, taking me through Wytheville VA, Bristol VA/TN, and on into Knoxville TN, where I checked into the Best Western on I-40 at Lovell Road at 12:08am ET.