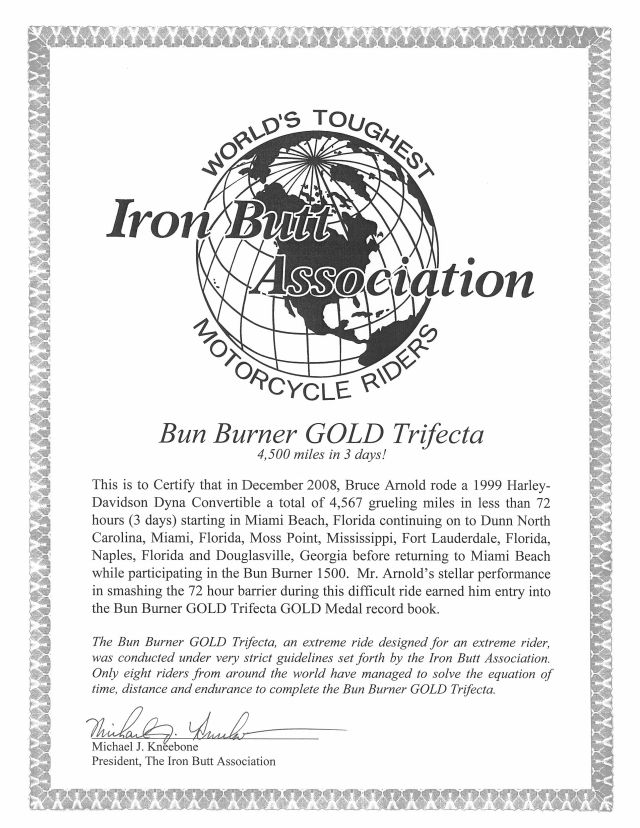 This series chronicles the rides and reflections of record-holding long distance motorcycle rider Bruce Arnold. Bruce was one of the first 10 Mile Eater Gold members in the Iron Butt Association, to which he has to date submitted 56 distance and endurance rides – 56 certified, 0 in-process, all ONE RIDE, ONE CERT including:

All of Bruce’s Iron Butt rides were completed “old school” – meaning without the use of oversized tanks, fuel cells, Bluetooth headsets, Garmin GPS, or heated clothing. From January 2007 to May 2008, he submitted at least one IBA ride each month for a total of 22 rides over the 17-month period. As for his distance and endurance motorcycle riding records:

After 2014, Bruce’s night vision deteriorated to where he could no longer ride safely after dark. Consequently, he can no longer eat the 1000+ miles per day that distance rides like the SaddleSore 1000 require – much less the 1500+ daily mileage minimum for endurance rides like the Bun Burner Gold. As one of the Last of the Motohicans, he still enjoys motorcycle touring from sunrise to sunset.

See also the Distance Riding section of the Drill Down Here menu.

Many thanks for their encouragement and support go to:

No thanks go to the LDRiders (aka ELDIWINIs) who referred to me and my fellow Motohicans as, and I quote, “…the Hardly Maggot lifestyle biker, the chrome and leather crowd.”