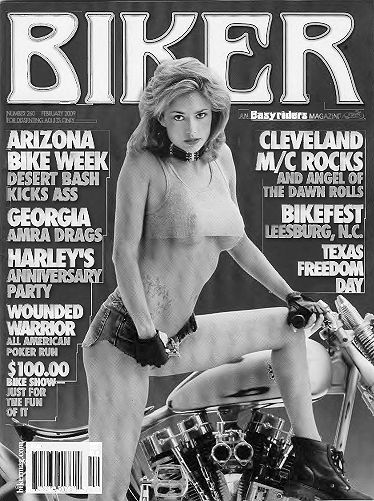 In its February 2009 issue, Biker Magazine recognized Bruce Arnold’s (a.k.a. IronBoltBruce’s) many years of political activism in the bikers’ rights / motorcyclists’ rights arena by crediting him with this quote of the month:

“The battle for bikers’ rights is not about patches, parties or poker runs. We fight to protect the freedom and promote the interests of American motorcyclists … to defend our right to choose our own modes of transportation, attire and lifestyle … to deter and defy discrimination against us … and to vanquish those who violate our rights or right-of-way.”

With the release of the December 2009 issue of Bruce on Bikers’ Rights, however, this series was rolled into Bruce’s Rights Riders List, email broadcasts to which were often blocked by Big Brother and consequently terminated after 188 releases. But what the Hell: There are over 10 million motorcycle owners in America … a large percentage of whom consider themselves “motorcyclists” … a small portion of which qualify as “bikers”. Of these, less than 300,000 claim or show any interest in protecting their rights as citizens much less riders, and less than 1,000 hold any true claim to being “bikers rights activists”. IronBoltBruce was one of them, but Bruce eventually tired of fighting fixed contests in rigged arenas defending illusory rights for a clueless and care-less constituency.

See also the Bikers’ Rights section of the Drill Down Here menu.

My respect, regards and regrets go out to:

To the following assholes and idiots, I send a big GFY:

“This is my position on Bruce Arnold in the greater context of motorcyclists rights. He will fight anyone, anytime, anywhere, and he will never back down. Never met him, so I can only assume this is the case in person as well as on the Internet. I have and will continue to have Bruce’s back when and where I believe he is fighting on behalf of the greater good. I would be hard put to find anyone more aggressive.”–Rusty Bongard, 12 March 2009