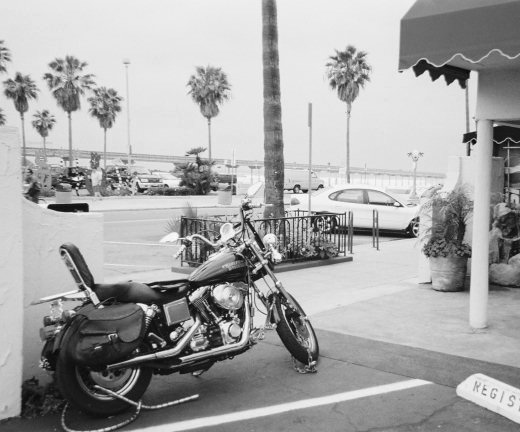 Tuesday May 30, 2006 marked the end of seven days and almost 5,500 miles on two wheels for me. The lion’s share of this saddletime was devoted to my successful completion of what the Iron Butt Association calls the CCC Gold or 100CCC Insanity. The 100CCC requires that you ride from coast to coast to coast in 100 hours or less and that each of the back-to-back, coast-to-coast runs be completed in 50 hours or less. In this case, I rode from Jacksonville Beach, FL to San Diego (Ocean Beach), CA and back again, covering 4,728 miles in 95 hours 49 minutes.

According to the IBA rules for the 100CCC, the run clock for my ride back to Jax Beach started automatically at 5:59am PT, Saturday May 27, exactly 50 hours after the start of my westbound ride. I slept right through that event, however, having elected to get in a couple more hours of rest and a bit of sightseeing before I headed back east.

I awoke to overcast skies, and began mentally preparing myself to face the same “tempest on the mountaintop” that had almost bested me a few hours before. Soon after I was eastbound on I-8, however, things changed rapidly for the better. As I began weaving my way up and through the Laguna Mountains, I broke through the low-lying clouds and into sunny skies. Mother Nature’s fury was spent, and my reward for enduring it was some of the most breathtakingly beautiful mountaintop views you can imagine. And just to make things absolutely perfect, the wind I fought so hard for so long riding west, was now at my back riding east. I didn’t just ride across the Lagunas to Ocotillo … I’d say it was more of a glide.

Ocotillo CA had the same strange isolated winds as it had the night before, but in daylight they were not nearly so intimidating. A quick fuel stop and then it was east across the Imperial Valley, which can aptly be described with one word: Sand. Flat empty stretches of sand … irrigated crops growing in sand … Sahara dunes-looking mountains of sand … all the way to Arizona.

Eighty-five miles east of Yuma, I pulled over in the one-horse town of Sentinel AZ. It looked like one of those “last chance” ghost towns from Route 66 or Death Valley. For a moment I thought it might be deserted, but then I heard the sound of a compressor running, and headed for the door. Inside was a general store from yesteryear: an ancient soft drink cooler, a few sparsely stocked shelves of basics, a dusty rack of cheap plastic kids’ toys, and everywhere that smell, that corner store laundry soap and bubble gum smell. I felt like I was back in my boyhood days and I wanted to stay, but the venerable proprietor was looking at me like I was from another world. I sadly remembered that I was, and returned to my eastward trek.

Long distance riding gives you a lot of time to think, and I find that to be downright therapeutic. It’s not healthy, though, to turn too much attention inward, get lost in thought and “zone out”. That happened to me somewhere between Tucson and Benson AZ. I came to from a daydream in the middle of empty desert, looked down at my fuel gauge, and realized I was running low on gas, did not know where I was, and had no idea how far it was to the next pump. Ughh! I can’t honestly say if this was a fatigue-induced event or simply a brain fart, but for a moment I simply did not know what to do. Then a quick mental coin toss, and I decided to keep rolling eastward and hope for the best. I slowed to save gas, and agonized as mile after mile after mile yielded no signs of civilization or reasons for hope. Then at last, I top a rise and see a billboard inviting me to take the next exit to see “The Thing”, a tourist attraction complete with 24-hour gas services. Well, I never did see “The Thing” … but you better believe I was happy to see those gas pumps!

Those wicked crosswinds were still blowing as I once again rode through Road Forks NM, but this time I was prepared and nothing was lost. From there, a steady tailwind made for easy riding, and I made Deming around dusk. Two hours more took me through El Paso, and by midnight I was near Van Horn and into the Central Time Zone.

Remembering that 24-7 gas stops in West Texas are few and far between, I was watching for my next opportunity to fill up. According to the exit signs, Balmorhea was it. Sure enough, the lights were on outside the Fina c-store, but the gas pumps wouldn’t take any of my cards, and as it was 1:49 am the store was closed. I thought my luck had run out, but then a light came on, and then another, and then a kind but sleepy old cowboy in his undershirt stepped out of the store to tell me his credit card rig was busted, but I could pay cash if I needed gas. I did, and I thanked him. I pumped my gas, and headed back into the starry Texas night. Three hours more and no deer had crossed by path, so I rolled safely into the parking lot of the Best Western Sonora at 4:48am, Sunday May 28.

As was the case on my westbound ride two days before, I checked out of the Best Western Sonora roughly four hours after I had checked in. Before, I felt fully rested, but this time was not the same. Perhaps I’d slept as long, but not as deeply. Or perhaps fatigue was catching up with me. Either way, I began this last leg of my ride feeling more groggy than refreshed. I must have still been in a mental haze when I stopped for gas 55 miles later, as I paid and then pulled out without pumping, and had to loop back for an embarrassing do-over.

Except for gusty winds and hard rain from Flatonia to Houston, the remainder of my ride eastward across Texas was uneventful. Mostly sunny skies prevailed as I crossed into Louisiana, but heading east on I-12 out of Hammond that suddenly changed. In less than three minutes, the skies went from blue to black, and then rain started coming down in sheets. I stopped under an overpass, donned my hard weather gear, and rolled back out into the torrent. Thanks to Zooke Anti-Fog my visor didn’t fog over, but the rain was coming down so hard that all I could see in front of me was a wall of water. Then once again, when I needed a break, Providence gave it to me: A cager in a small red car saw my distress, eased in front of me, turned on his emergency flashers, and guided me through the downpour until the rain subsided. What a nice guy!

Once I reached Covington LA, what lay before me was a straightforward night ride of 560 miles. Normally, this would’ve been water off a duck’s back, even with the intermittent mist that fell all along the way. But by this point in the run, things were no longer “normal”. I was wet … I was tired … and I was sick of being wet and tired. Still, I knew that most of the challenges were behind me now, and all I needed to do was hang on to finish the run.

I made it to Bonifay FL by 12:45am, where I loaded up on Red Bull and peanuts to recharge myself for the last 273 miles. Still, those final few miles proved far more grueling than the thousand that came before them. There’s just something about riding through the wee hours of the morning that drains you (well, me anyway), and when you’re doing it for the fourth consecutive night, the effect is really amplified. So, I have to give credit where credit is due:

If I had not read and internalized Don Arthur’s classic article on “Fatigue and Motorcycle Touring”, I might not have finished the 100CCC, and it is quite possible that my ride might have ended in injury or death. Thanks to Don, however, I had done just about everything I could to be physically ready for the ride … to mitigate fatigue along the way … and to recognize and cope with its effects towards the end. If ever there was an article that should be on every distance rider’s required reading list, Don Arthur’s Fatigue and Motorcycle Touring is it. 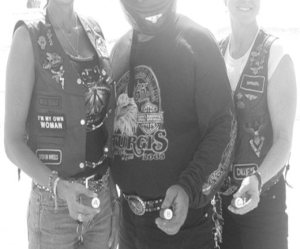 Dawn’s early light appeared in the east as I entered Jacksonville from the west. And as the sun rose, so did my spirits. I-10 terminated at I-95 south, then it was a quick sprint across 202 to A1A and Jacksonville Beach. The seemingly unbearable fatigue of just two hours before was completely gone, replaced in its entirety by the elation of imminent victory. A c-store gas receipt timestamped my end-of-run at 6:48am, Monday May 29. I had ridden from coast to coast to coast, and done it in less than 100 hours. One final round of witness signatures and sand scooping with biker buddies Kevin and Debbie Dineen (Jacksonville FL) and Axel and Vicky Wojnar (Davie FL), and the 100CCC prize was mine.