At 12:31pm ET on Monday, 3 September 2007, I logged an ATM receipt at the South Beach Wachovia marking the end of my 26th Iron Butt ride and 13th Bun Burner Gold. On this BBG run, I covered 1561 miles in 22 hours 52 minutes. My route–which included several scenic/nostalgic miles of the historic Lincoln Highway and Route 66 through rural Illinois–was from the Chicago suburb of Plainfield to Miami Beach by way of East St. Louis, Paducah, Nashville, Montgomery, Dothan, Tallahassee and Jacksonville.

I began my ride the previous day at Clarke’s Joliet I-55 Auto/Truck Plaza on US-30 in Plainfield, about two miles southeast of the historic three-block alignment of Route 66 and the Lincoln Highway. The Lincoln Highway was America’s first transcontinental highway. So as John Steinbeck wrote in The Grapes of Wrath, if Route 66 was America’s “Mother Road”, then the Lincoln Highway is our nation’s “Father Road”. Formed in 1913, it spanned over 3,300 miles, running from New York’s Times Square in the east to San Francisco’s Lincoln Park in the west. According to Wikipedia.org, the final routing corresponds roughly to the following:

At Clarke’s, I collected my start-of-run witness signatures from biker-friendly truckers and others having lunch at the restaurant counter. From there, I left our “Father Road” heading south on I-55 through Bloomington to Divernon, where I exited the interstate to cruise down a few more miles of the “Mother Road”. Route 66 was formed in 1926. It originally spanned 2,448 miles from the intersection of Lake Shore Drive and Jackson Boulevard in Chicago through Illinois, Missouri, Kansas, Oklahoma, Texas, New Mexico, Arizona, and California, ending at what is now the intersection of Olympic Boulevard and Lincoln Boulevard in Los Angeles. Much has changed since 1926, however, and as Route 66 author and cartographer Jerry McClanahan observes:

“Although long, unbroken stretches remain, Route 66 today is essentially a discontinuous byway, a wild mix of original roadbed, overlapping upgrades, Interstate service roads, and abandoned remnants…. Some are too rough to drive, lead to dead-ends, or have no access, while a few are absolute jewels of the road…. [A trip down Route 66 lets you] experience how America found its way west in the days of greasy spoons and neon signs and nickel pop.” 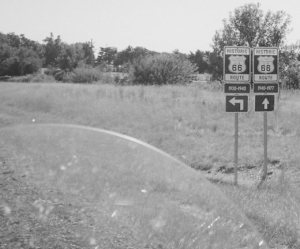 One place for such nostalgia is the small Illinois town of Litchfield. As you will encounter at many other points along the “Will Rogers Highway” (as Route 66 was dedicated in 1952), riding southward into Litchfield the Mother Road forks making two alignments: the older (1930-1940) two-lane to the left, and the newer (1940-1977) four-lane to the right. Although either fork will take you through a quaint community suspended in a slower, simpler time, I recommend the left. Down that lane, I found three of those “jewels of the road” McClanahan refers to: First was the Skyview Drive-In, which as of this writing remains one of America’s last operating drive-in theatres (call 217-324-4451 and find out what’s showing!). A little further down was the Ariston Cafe which was founded in 1924, relocated to its present location in 1935, and inducted to the Route 66 Hall of Fame in 1992. And a few blocks more was Stacey’s Route 66 Cafe, where I stopped to guzzle some cold iced tea and snap a few photos of some real friendly people. You can view them and hundreds more online here. 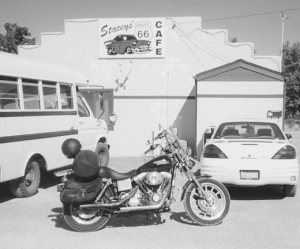 Logging my stop at Stacey’s reminded me that I was on a Bun Burner Gold run, and that I wasn’t going to cover the required 1500+ miles in under 24 hours if I stopped to smell the roses all along the way. So reluctantly, I ramped up onto the freeway and back to the present, heading southwest for the few miles remaining before I reached the outskirts of St. Louis and turned back southeast for the long, hard ride home to South Florida.