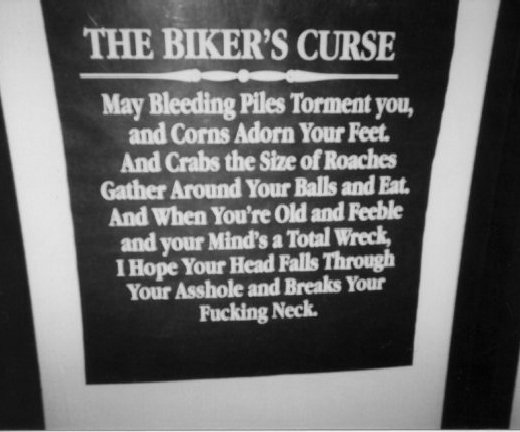 Despite the advantage of once again having perfect weather and ideal riding conditions from start to finish, I set no new personal best in terms of distance covered or MTH. In fact, the only thing remarkable about this ride was the stupidity I demonstrated in the pre-dawn darkness by being too lazy to flip up a fogged-over shield and consequently mistaking a massive mud puddle for the concrete entranceway to my last gas stop in Luling TX. I spun my way out that quagmire, but man, what a mess!

My ride from Miami Beach to San Antonio may have ended up a muddy mess, but it was a successful run nonetheless. I certainly can’t say the same for my return ride two days later…

At 8:31am CT on Sunday 9 December 2007, I pulled another ATM receipt at the TA Travelcenter off Exit 583 in San Antonio TX, and began what was intended to be my next BBG run by heading east on I-10. The sun quickly burned off a light morning fog, giving me warm, sunny blue skies and light Sunday traffic all the way to Houston TX, on through Beaumont TX and into Louisiana. East of the Mississippi River Bridge in Baton Rouge LA, I merged onto I-12 and continued east. Shortly after 3:00pm, I was surprised by a sudden but short-lived downpour as I was coming into Hammond LA. I shouldn’t have been surprised, though, because the fact that I wasn’t wearing my raingear of course guaranteed that I’d hit rain somewhere. Anyway, from Hammond I headed north on I-55 to McComb MS, then east on US-98 to Hattiesburg MS. From there, I turned back south on I-59, stopping for gas a little after 5:00pm and just before sunset. The odometer reading I logged for that stop ended in “666”. That turned out to be fitting, as from there on out I would have the Devil to pay.

A few minutes after getting back on the interstate, I began to feel a chill. But not the chill I was expecting as the temperature dropped after sunset. This chill seemed to emanate from someplace deep inside me. I tried to ignore it and kept riding south, but by the time I reached Slidell LA and turned east on I-10, my leg and stomach muscles were starting to cramp from the constant flexing I was doing to keep from shivering. I managed to push on, reaching Diamondhead MS just after 7:00pm, where my body gave me no choice but to exit.

I rolled into the Kangaroo Express lot, pulled up next to a pump, and then struggled to bring down my sidestand and step off the bike. The Gulf Coast night air was cool, but not cold, yet I was shivering as if I’d been riding naked in a snowstorm (don’t ask). I went inside the c-store hoping to warm up, but it was cooler inside than out. With shaking hands, I bought a bottle of water and headed back outside to try and walk off the trembling. It didn’t work, so I opened my bag and pulled out my H-D hard weather suit, hoping the additional layer of clothing would warm me up enough to cease the shivering. I managed to get the “waders” over my boots, but my coordination was so impaired that I couldn’t pull the straps over my shoulders. The effort nearly exhausted me, and I finally had no choice but to ask a cager at the pump to help me out. He did. And as the suit warmed me up, my shivers subsided. Soon after, though, the quakes in my muscles were supplanted by queasiness in my stomach. I dropped to my knees, and vomited all over my rear tire.

I started feeling a little better at that point, and actually began to think again about completing my BBG run. I’d lost 45 minutes here and still had over 800 miles to go, but riding “over 1500 in under 24” was still a possibility. I gassed up and continued east. But not for long… The shivers returned, forcing me to stop and recover again less than 20 miles down the road. I fired her up and pushed eastward once more, but Moss Point MS proved to be the end of the line. My body started feeling like it weighed a ton. Every movement was a major effort, and I was so weak I was getting dizzy. I’d had it.. I took the next exit, checked into the first motel, and used my last remaining strength to unload the bike, undress myself and get into bed … where I stayed for two shivering, sweating, miserable days.

So ended my worst ride ever.