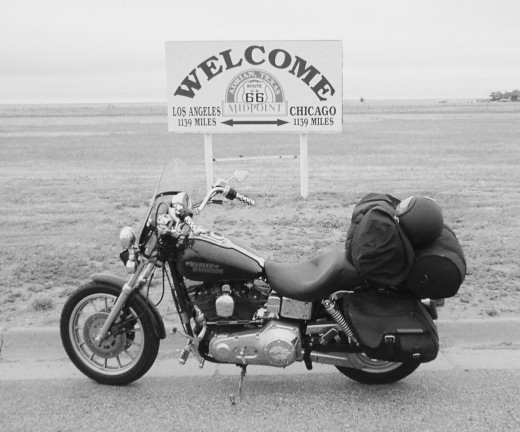 Last spring, some relatives invited me to visit their small ranch near Sierra Vista AZ. Memorial Day weekend seemed like a good time to take them up on the offer, so I logged onto Maps.yahoo.com to route my trip. The shortest route from Miami Beach to Sierra Vista computed as 2,232 miles. But as is often case, the shortest route was not what I was looking for. At that time, earning a SaddleSore 3000 patch and cruising some of “The Mother Road” (a.k.a. Route 66) were high on my wish list, so I charted a 3,069-mile course that would allow me to do both: From Miami Beach, my route was north on I-95 to Benson NC, then west on I-40 to Winston-Salem NC, then northwest on US52/I-74 to I-77 into Virginia, then southwest on I-81 to Knoxville TN, then west on I-40 (and parts of Historic Route 66) to Santa Rosa NM, north on Pre-1937 Route 66 to Romeroville NM, then south on I-25 to Las Cruces NM, and west on I-10 to Willcox AZ. This month, let me tell you about the third leg of this ride:

I normally fare pretty well staying at Best Western motels, but the Best Western Santa Fe Inn in Amarillo TX proved to be a disappointing exception. The curtains wouldn’t close, my wake-up call was late, the shower didn’t work, and their “hot breakfast buffet” consisted of stale bagels and a broken toaster. For thirty bucks a night, I might not complain. But for ninety bucks plus tax, it was a total rip-off. 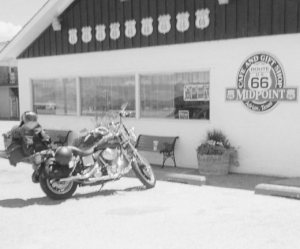 Belatedly, I pulled a gas receipt to log the start of this day’s ride at 8:43am CT on Friday, 25 May 2007. And for much of the next 250 miles, I would either be riding on or paralleling Historic Route 66. My first stop was at the “Midpoint of the Mother Road” in Adrian TX. There you will find official markers indicating that Chicago IL and Los Angeles CA–the two endpoints of Route 66–are equidistant at 1,139 miles away. And right across the two-lane blacktop from those markers is the Midpoint Cafe, wherein you’ll find good food, friendly folks, a must-sign guest registry, and a must-see Route 66 souvenir and gift shop. From there, it is a short ride west on I-40 to the New Mexico border, where the terrain change is almost as sudden as that of the time zone. The High Plains of the Texas Panhandle rapidly gave way to the rocky buttes and desert mesas that dominate this part of the New Mexico landscape. And while you may only need to set your watch back one hour here, setting it back one hundred years or more might seem equally appropriate. 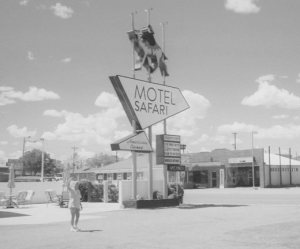 I exited I-40 once again to follow Route 66 through Tucumcari NM, where the Mother Road serves as both Main Drag and Motel/Restaurant Central. And if all of those campy motels and quaint cafes weren’t built in the 40’s, 50’s or 60’s, they were certainly designed to look that way. I didn’t have time to spend a couple of days immersed in the nostalgia that is Tucumcari, but I’ve definitely added that to my list of things to do someday!

Just west of Santa Rosa NM at exit 256, I left I-40 to follow the anachronistic 40-mile stretch of Pre-1937 Route 66 (Route 66 did not always follow the same route) that runs north to meet I-25 near Romeroville NM. For the next sixty miles or so from there to Santa Fe NM, I rode along the edges of the Sangre de Cristo Mountains– the southernmost subrange of the Rockies. And the higher I rode, the more spectacular the vistas to the northwest became, the visual climax being a succession of massive mountain ridges–each rising higher than the one in front of it–culminating in the far away yet clearly visible snow-capped 12,622 ft. summit called Santa Fe Baldy.

From there, it felt like a downhill race to the desert floor and the thriving metropolis of Albuquerque NM, where I stopped to strap down some loose chrome and choke down a quick cheeseburger. Shortly thereafter, just as I reached the southern edge of the city, a huge black–and I mean BLACK–cloud blew up out of nowhere and started pummeling me and the bike with marble-sized hail. I had my rain pants on already, but I still had to pull over quickly and put on my hard weather jacket and brain bucket. I pulled back onto the interstate continuing south, but with wicked crosswinds blowing sideways rain and hail, it took me an hour or more to make the next 30 miles. The next 100 miles after that were no picnic either. But as I neared Las Cruces NM, I finally broke out from under the storm clouds and had blue skies above me.

But not for long… In Las Cruces, I-25 merged into I-10 and I headed west towards Deming NM. But before I could make that next 60 miles, another hailstorm blew up from South of the Border. The hailstones were not as large and the raindrops not as cold as those of the tempest earlier, but the volume and intensity of the downpour was much greater. It was a real challenge seeing ahead and staying upright, but I soon found a “sweet spot” behind the trailer of an 18-wheeler, and followed his taillights all the way across the Continental Divide and into Lordsburg NM. That was just enough distance to finally put the gusty winds and hailstorms behind me.

Night fell as I rode past the eerie truck stop at Road Forks NM and on across the border into Arizona. From there, I had dry roads and starry skies for the few remaining miles to my final destination of Willcox AZ, best known as the home of the Willcox Cowboy Hall of Fame and Rex Allen, last of the Silver Screen Cowboys. I pulled a gas receipt at the Willcox TA TravelCenter (TaTravelCenters.com) to mark the end this leg and my SaddleSore 3000 ride at 9:29pm MT on Friday, 25 May 2007.