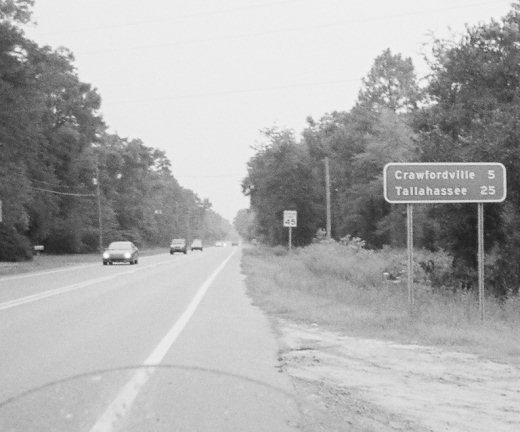 At 11:58pm Saturday, 10 September 2006, I pulled an ATM receipt at WAMU South Beach to mark the end of a long day’s ride around the Sunshine State. I logged 1,095 miles in 16 hours and 7 minutes, earning upon certification another Iron Butt SaddleSore 1000 certificate. The entire route was within Florida borders and never intersected or crossed over itself, so it should qualify for the in-state FL-1000 designation. Here’s the route, leg by leg:

Thanks to a couple of careless cagers, my ride got off to a very slow start. An accident on SR836 had traffic backed up forever, and by the time I weaved through the cars and down side street detours to SR826, IH-75 and finally the Alligator Alley toll booth, the first 47 miles of my ride had eaten almost an hour of time. Fortunately, for the next 109 miles across the Alley then north to Fort Myers, I had clear roads and a good opportunity to twist the throttle and make up lost time.

From Fort Myers north to Alachua, I rode through 259 miles of IH-75 freeway congested by eighteen wheelers, Gator fans and other cagers, many of whom were apparently too busy or too distracted to pay attention to their driving. I tried to stay in the left-hand lane, so I could make time while only having to defend on the right. Even so, on several occasions I had to hit my horn or otherwise awaken inattentive weavers. And three different times, cagers with cell phones glued to their ears–wheeling and dealing, or simply running their mouths–came right on over into my lane. It was as if I didn’t exist, or more likely, as if they didn’t care. I swerved out of harm’s way each time, but only barely so.

From Alachua to Fort White, then westbound on US-27 to Perry and US-98 to Medart, I left the frantic freeways for awhile to enjoy a scenic ride down two-lane byways built for simpler times. The motorists along these roads seemed to be from a totally different tribe than the communication-crazed cell phone addicts whose indifference had nearly done me in. Yes, these country folks were courteous and considerate cagers indeed! Or so I thought, until…

I was riding north on US-319 through Crawfordville, making only about 45 mph due to slow traffic and a wet road. Suddenly the black-trimmed, bright yellow Asian Hummer knock-off in front of me braked hard and made a quick right turn. He gave no signal to warn me, but I was able to avoid ramming his rear end by veering right to the shoulder and stopping just short of his turning point.

I felt an urge to express my dissatisfaction with this cager’s negligence, so I rolled into the strip center behind him. He must have suspected the purpose of my proximity, because rather than continuing left into a parking space, he quickly wheeled right, jumped a concrete curb, and then plowed through a ditch to get away! He didn’t go far, though, because the small lot he escaped to had no exit. I came up on his left and stopped with my front wheel perpendicular to the driver’s door, close enough to ram, but far enough away to maneuver. I stood up from my saddle, crossed my arms, and waited for the creep to get out of his cage. He didn’t. I motioned for him to exit his vehicle. He declined. So I gestured for him to roll down his window. He did.

What peeked out over the tinted glass was the pale face of a kid half my age, maybe half my size, and so wide-eyed that he must have been stoned, scared, terminally stupid, or all of the above. Realizing there could be no honor in carving this punk a new asshole, my anger morphed into disgust. I asked him if his turn signals worked, and he replied with a slobbering blah-blah-blah. I then conveyed in no uncertain terms the importance of respectfully sharing the road with bikers, gunned my engine for emphasis, and headed back to the highway.

A few minutes more and I hit the Capitol Circle in Tallahassee, which took me to US-90 and IH-10 eastward to link with IH-95 near downtown Jacksonville. From there it was a straight shot south to Miami and the Beach. With luck, I had survived another long day in the saddle … and avoided becoming another human sacrifice to the cellular gods.