Part 1 of 2: Heading North to the Highlands

On the first leg of this SS2000 I rode 1031 miles in 15 hours 45 minutes for an MTH of 65.46, which isn’t bad considering the number of photo ops and other stops I made along the way. My route from Miami Beach, Florida to Charleston, West Virginia was as follows:

The evening before this ride began, I logged onto BestWestern.com to reserve a room for the following night at their newly-renovated Charleston Plaza Hotel, then clicked over to Maps.Google.com to plot and print a detailed route map from my doorstep to theirs. I then packed my overnight touring bag, and hit the sack early. Rising early the next morning, I washed downed a hearty eggs and bacon breakfast with a pot of Don Francisco’s Colombia Supremo as I made a final check of the weather along my route at Nws.Noaa.gov. They predicted a 30% chance of thunderstorms for most of the way, so I pulled on my Gore-Tex rain pants before lacing up my waterproof H-D FXRG-2 boots and strapping on my patch-covered leather riding chaps. As always, that guaranteed that even if I didn’t get soaked by precipitation from without, the high temperatures and humidity would soak me with perspiration from within. I then Z-WAXed my ten-dollar sunglasses, SPF-ed my face and arms, plugged my ears, skull-ringed my fingers, put on my black Schampa do-rag and buffalo-hide riding vest, grabbed my keys and touring bag, and headed out the door. 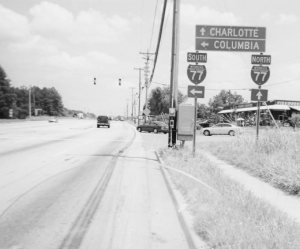 I logged the start of this ride by pulling an ATM slip from a SoBe Wachovia at 6:34am ET on Friday, 12 June 2009. From there I headed north by the route shown above. And thanks to my rain pants, there were scattered gray clouds but no rain fell for the first nine hot and muggy but otherwise non-remarkable hours. I finally encountered lightning and showers along the 90-mile stretch of IH-77 between Columbia SC and Charlotte NC. But those heavy, ice-cold thundercloud raindrops brought a welcomed reprieve from the sweltering Carolina heat, and felt awfully good on my sun-baked arms and shoulders.

One hundred miles more brought me to the heart of Andy Griffith country, a scenic and serene stretch of rolling green hills cut through by US-52 running north from Winston-Salem through Mt. Airy to the nearby Virginia border. Around Mt. Airy, US-52 is referred to as the “Andy Griffith Parkway” in honor of their most famous native son. Mt. Airy was of course the inspiration for the fictional town of “Mayberry”, just as the neighboring town of Pilot Mountain provided the genesis for Mayberry’s fictional sister city “Mount Pilot”.

“Pilot Mountain” refers not only to a very real town, but to the very real and very unusual geological landmark nearby that dominates the landscape for miles around. Pilot Mountain is a quartzite monadnock [a huge knob] rising to a peak of 2,421 feet above sea level, and one of the most distinctive natural features of North Carolina. It is a remnant of the ancient chain of Sauratown Mountains, with its original Native American name being Jomeokee, for “great guide” or “pilot”. And I doubt any biker who’s ever ridden to Sturgis could long look at that omnipresent anomaly without in some small way being reminded of the Devil’s Tower in Wyoming. 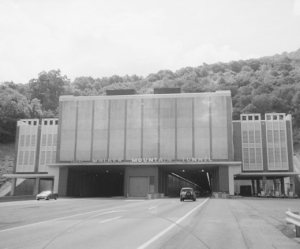 The next hundred miles, from Pilot Mountain west on IH-74 then north on IH-77 into Virginia, were hands down the most scenic part of the entire ride. From Fancy Gap northward, crossing the Blue Ridge Parkway, the spine of the Appalachians and on into the West Virginia border town of Bluefield, I was riding through the heart of the “Blue Ridge Highlands”. Here, the late spring shades of dark green trees on the slopes and light green grasses carpeting the valleys rivaled anything I have seen in the British Isles. And the lofty scale and broad expanse of the panoramic landscape would surely make Scotland’s William Wallace feel right at home. I found the twenty-mile stretch around Rocky Gap–bounded by the 4,229-foot Big Walker Mountain Tunnel on the south and the 5,412-foot East River Mountain Tunnel on the north–to be especially striking, and illustrative of what I consider the most marked contrast between the Virginia and West Virginia landscapes along my route:

Virginia’s Blue Ridge Highlands is an area of high mountain ridges made distant and majestic by deep, wide and seemingly endless rolling valleys; whereas North of the tunnel in West Virginia, steep mountain slopes are in your face and everywhere, but the valleys are narrow and flat land is a scarce commodity.

If someone were to tell me that John Denver considered West Virginia to be “Almost” Heaven because he saw Virginia’s Blue Ridge Highlands first, I’d give them no argument … especially not based on the final hundred miles of my ride up the West Virginia Turnpike. As the sun went down so did the temperature, and that “30% chance of thunderstorms” finally caught up with me. Every 26 wet and chilly miles, I had to wait in line and pull my gloves off to pay a $1.25 toll. And in between those stops, it quickly became evident that the State of West Virginia is not fully vested in the benefits of 3M reflective technologies. What was reflecting was the glare of the headlights of oncoming cars on the raindrops that pelted my visor, which made tracking the roadway’s twists and curves through the mountains and downpour a challenge to say the least. I came close to leaving the pavement more than once, but fortunately I wasn’t tossing horseshoes. Once again Providence gave me a pass, and at 10:19pm ET I checked my very wet and tired butt into a very nice but affordably priced room at the Charleston Plaza.