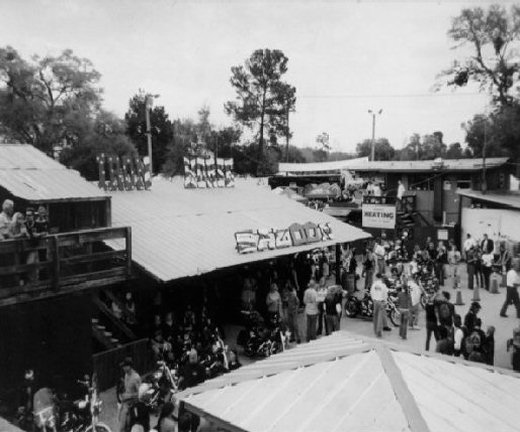 Explaining Our War To The Wild Hogs

I began the second day of Daytona Bike Week 2007 by riding to Deland for a hearty breakfast at Gram’s Kitchen on SR44, then cruising downtown for a leisurely stroll through the vendor booths set up for the nine hours of the Deland Bike Rally. At one of those booths, an ABATE of Florida volunteer handed me a three-inch paper coaster in a plastic wrapper, and told me it was “an air freshener for my motorcycle”. I have yet to make the mental connection between freedom-fighting and air-freshening, but someday maybe someone will explain it to me…

Anyway, my next stop was the Iron Horse in Ormond Beach, where hundreds of hardy riders in wet leathers were having a great time despite the chilly downpour. I made my rounds and eventually ended up at a picnic table on the front porch, where I struck up a conversation with a local couple and two “Wild Hogs” hailing from a Kentucky suburb of Cincinnati. I told them I was into long distance riding and the fight for bikers rights, and that I published articles about both on my LdrLongDistanceRider.com website and Bruce-n-Ray’s Biker Forum. Their response was not what I expected:

“What do you mean by the fight for bikers rights?” one of them asked.

I could tell by the three other blank stares that no one else had the answer, so I started into a current events briefing on inattentional blindness and the folly of banning cell phones rather than cell calls while driving … the hypocrisy of the medical community attacking motorcycling, when our highways are safer than our hospitals … our HIPAA discrimination issues in DC … the helmet law battles out west (and how the AAA always shows up at lid law hearings, and the AMA never does) … the ape hanger arguments in Connecticut … the NHTSA Nazis’ latest statistical spin … and so on. But as those blank stares began to glaze over, I realized my audience had no clue what I was talking about or why it should concern them. So I stepped down from my soap box, and let the conversation drift back to bikes, beer and boobs.

I guess I could have handed them my ABATE of Florida air freshener, but they were confused enough already. Or perhaps I could have recommended they attend the next meeting of their local ABATE or SMRO chapter, but then I’d have to explain what “ABATE” and “SMRO” stand for. SMRO is of course short for “State Motorcyclists’ Rights Organization”, but ABATE can refer to “A Brotherhood Against Totalitarian Enactments”, “American Bikers Aiming Towards Education” … or both … or neither. And besides that, what would happen if they did attend that meeting?

Would they acquire an understanding of what their rights as American motorcyclists should be, or have their sensibilities assaulted by right-wing ravings with no relevance to riding? Would they go home with a newfound appreciation of their obligation to fight for those rights? Or would they simply come away with a new patch for their Hot Leathers vest, an invitation to the next chapter beer bust, and a flyer for some charity poker run? What would happen if they attended the next meeting of your SMRO?

Too late now for me to make it right, I suppose. I may never get another chance to explain our war to those Wild Hogs. But just in case you do, please tell’em why we fight:

The battle for bikers’ rights is not about patches, parties or poker runs. We fight to protect the freedom and promote the interests of American motorcyclists … to defend our right to choose our own modes of transportation, attire and lifestyle … to deter and defy discrimination against us … and to vanquish those who violate our rights or right-of-way.