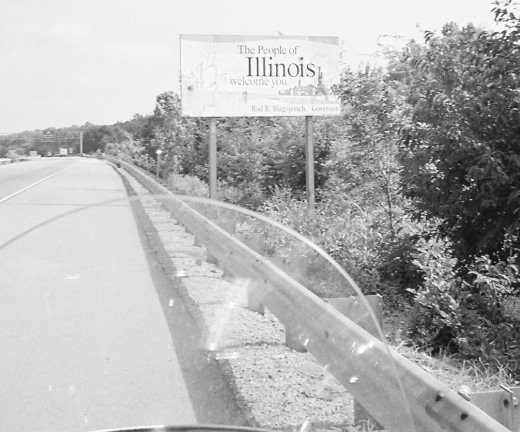 At 7:45am CT on Friday, 31 August 2007, I pulled a gas receipt at a Chicago suburb c-store marking the completion of what I submitted to the IBA as my 25th Iron Butt ride and 12th Bun Burner Gold. I covered 1,510 miles in 23 hours 40 minutes, riding from Miami Beach FL to Summit IL by way of Jacksonville, Atlanta, Nashville, Paducah, and East St. Louis. The most remarkable aspect of this ride was that–once again–it was only by the intervention of Divine Providence that I was able to complete it…

I began the ride by logging a Wachovia ATM slip in South Beach at 9:05am ET the previous day. The sun was bright, the skies were blue, the roads were dry and traffic was light, so I made excellent time for the first couple of hours northbound on I-95. Then somewhere around mile marker 162, I moved into the left lane and opened her up to pass a slow caravan of cagers. And just when I reached a point where there was nothing ahead of me but empty road, it happened: All of a sudden, the bike started wobbling in the front and fishtailing in the rear. And even though I hadn’t heard it or seen what caused it, I knew that my rear tire was flat. Really flat, and it got that way really fast. This was no slow leak like I’d experienced outside of Tallahassee a few months earlier. This was a blowout!

The wobbling and fishtailing came on so suddenly and was so severe that the bike was weaving erratically over both lanes of the interstate (must’ve been one helluva show for the cagers behind me). My first thought was “This is it…” But imagining what it would feel like to have my body smeared down half a mile of asphalt like bloody butter over so much bread steeled my nerve: I firmed my grip on the handlebars and vowed to keep my “wheels on the road” for as long as I could.

I knew better than to touch my brakes in this situation. Instead, I eased off on the throttle, expecting the bike to stabilize as it decelerated. It should have, but it didn’t. Instead, the more I tried to keep the handlebars from jackknifing, the more the rear end would fishtail. And the more play I gave the handlebars, the more erratically I weaved from left to right. I am not sure why it happened this way, but I suspect that whatever stability I was gaining from deceleration was being lost as the rear tire was working its way off of the rim.

I had done everything I knew how to do, and even though I’d slowed to half the speed I was running when the blowout occurred, I still did not have full control over the bike. I knew I was losing the battle. I stopped wondering if I was going to go down, and started thinking about where and how it would happen. Before me and to my right was solid asphalt, but on my left was an open median, about forty feet wide sloping gently to the middle, covered with a bed of tall, thick green grass. The options were hard pavement or soft grass, so my choice was obvious.

Ever so gently, I leaned/eased/influenced/willed/somehow got my wildly wobbling wheels angled towards the median. I shot over the edge of the pavement, airborne just briefly before my wheels touched down in the grass. What happened next was so unexpected as to seem surreal: I did not go down! Instead, when my rear wheel landed in the deep blanket of soft grass and sandy soil, the bike immediately stabilized, then slowly rolled down to the bottom of the slope, and stopped. Still upright, and with me still in the saddle! I planted my feet, and thanked a merciful God for being able to do so.

The engine had died because the bike was still in fifth gear when it stopped, but I shifted down to neutral and she fired right up again. I then nursed her back up the slope to mile marker 164, my rear rim plowing up the grass as I went. I pulled my HOG manual out of my saddlebag, and luckily found a Harley-Davidson dealership only ten miles away. I called and they quickly came and towed me, changed the tire, and had me back on the road by 1:15pm. That left me with just enough time to twist my throttle and log the required 1500+ miles in under 24 hours.

Both Heaven and Harley-Davidson had come to my aid, and I won’t forget that. But I must also report that no cager stopped to offer me any assistance. Not the ones that I passed just before the blowout, who must have witnessed the entire spectacle. And not the ones who passed in both directions as I was flying off into the median, rolling down the slope, or fighting my way back up to the roadside. I won’t forget that, either.