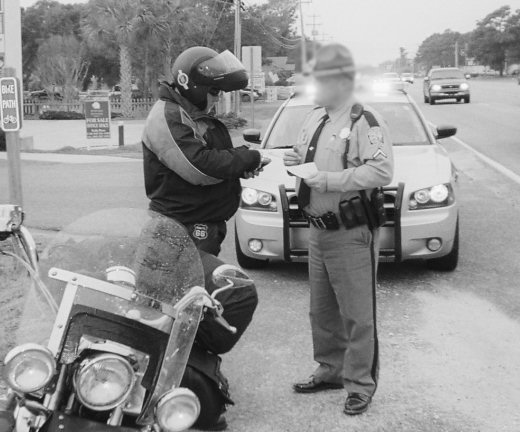 If your email address makes their Broward County list, A.B.A.T.E. (as in “Always Bring Alcohol To Events”) will keep you well posted on all the local beer-busts. And if you ever need a key ring or air freshener for your bike, A.B.A.T.E. (as in “American Bikers Aiming Towards Education”) of Florida maintains a highly paid lobbyist who’s more than willing to make side deals with legislators, or even sell out his constituents, if that’s what it takes to secure state funds for such worthwhile safety resources. But if you happen to be part of the “old guard” that originally founded A.B.A.T.E. (as in “A Brotherhood Against Totalitarian Enactments”), then you won’t need to go online and read this article in order to appreciate why a few weeks ago we rode 650 miles–to Myrtle Beach, South Carolina–with my sole intent being to dare the LEOs there to give me a ticket:

The needs of noble NVCD (non-violent civil disobedience) aside though, reading the last two installments of this column will assure you that the last thing I would normally seek out is a traffic ticket. And thanks to information from the NMA … and inspiration from an absolute necessity of not accumulating any more points on my driving record … I’m getting much better at avoiding them. Well, if not the tickets, at least the points. I admit that, not counting my act of protest against the discrimination taking place in Myrtle Beach right now, I have been pulled over seven different times in four different states over the past six months. But note that I said “pulled over” and not “ticketed”. If you’re going to defend yourself against unjust speed traps and other unrealistic speed limits and traffic laws, you have to view each occurrence as a process rather than an event, and be prepared to champion your own interests at each step along the way. Let’s consider, for example, the actions and outcomes associated with my last seven (unwanted) blue-light invites:

Incident #1: I got caught in a neighborhood speed trap operated by a Miami cycle cop. He was in a big hurry, did a lot of telling and not much asking. I knew almost instantly nothing I said was going to prevent the issuance of a citation, so I just kept quiet. But Miami-Dade is one of those counties where getting the right attorney means the ticket goes away. I did, and it did.

Incident #2: I weaved and whitelined my way through a slow-moving cager caravan on a North Carolina interstate only to have the leader of the procession–a state trooper in an unmarked gray Dodge Charger–hit his hidden blue lights just seconds after I’d passed him and straightened up. A rider himself, he complimented my style but gave me no slack on speed. He did, however, assign my case to a courtroom where a reasonably-priced attorney convinced an accommodating judge that what we actually had here was a non-moving offense.

Incident #3: Riding through Central Florida in the darkness of the wee hours, I missed a partially-obstructed reduced speed limit sign coming into a stretch of interstate construction, allowing a waiting Sheriff’s Deputy to sprung his trap. After pulling me over, he opened his door but sat in the cruiser for several minutes arguing with someone on his cell phone. (Wife or Ex, I bet.) He finally stormed up and asked me if I knew what the speed limit was, but before I could get a word out he cut me off and went straight to the “license and registration” script. I had little chance of changing his irate mind, and later learned I’d have no chance of winning if I tried to fight in court. So I played one of my five “Get Out of Jail Free” cards instead.

Incident #4: Heading west on I-10 just east of Tallahassee one crisp sunny morning, I topped a rise and caught the attention of one of the state cruisers that often lurk along that stretch. I wasn’t going what I considered an excessive speed, but apparently that wasn’t the consensus. As soon as I saw him hit his lights and hit the road, I slowed and pulled over hoping to make nice. And as the white-haired gentleman strolled up, I looked back with a grin and said “I hope you pulled me over to give me some good news!” That got a chuckle, and that broke the ice. And that, combined with him being a Harley man as well, got me off the hook.

Incident #5: There’s a rather colorful story here that I shared in last month’s column entitled “Taking a Stab at Ticket-Fighting, Texas Style”. If you missed that one, or any other previous installment of this column, you can read them all online at here LdrLongDistanceRider.com.

Incident #6: Prior to this incident, I operated under the misconception that the speed limit throughout the Florida Turnpike System was 70mph except for the toll booth areas. But along a stretch where I now know it is not, one of Florida’s two-wheeled troopers pulled me over and suggested I be more observant of the posted speed limits. We then shared some friendly biker chat, shook hands, and went our ways. Hey, no harm no foul, right?

Incident #7: Along the way from our motel in Georgetown to the staging area for the Myrtle Beach Freedom Ride in Murrells Inlet, one of South Carolina’s finest stopped me … ostensibly to suggest that when the posted speed limit drops 15mph I might want to consider doing the same … but I think really just to let me know there were LEOs in SC who supported what we were about to do. At least in their hearts, anyway.

So there you have it: Seven stops and zero points! Zero stops would be better, of course. But as long as we have speed traps and unrealistic traffic laws, “zero stops” will remain an improbability for even the most cautious, compliant and conscientious. And as it is when faced with any injustice, free men must decide whether to fight or submit. As Frederick Douglass observed, “Find out just what people will submit to, and you have found out the exact amount of injustice and wrong which will be imposed upon them; and these will continue until they are resisted with either words or blows, or both.”